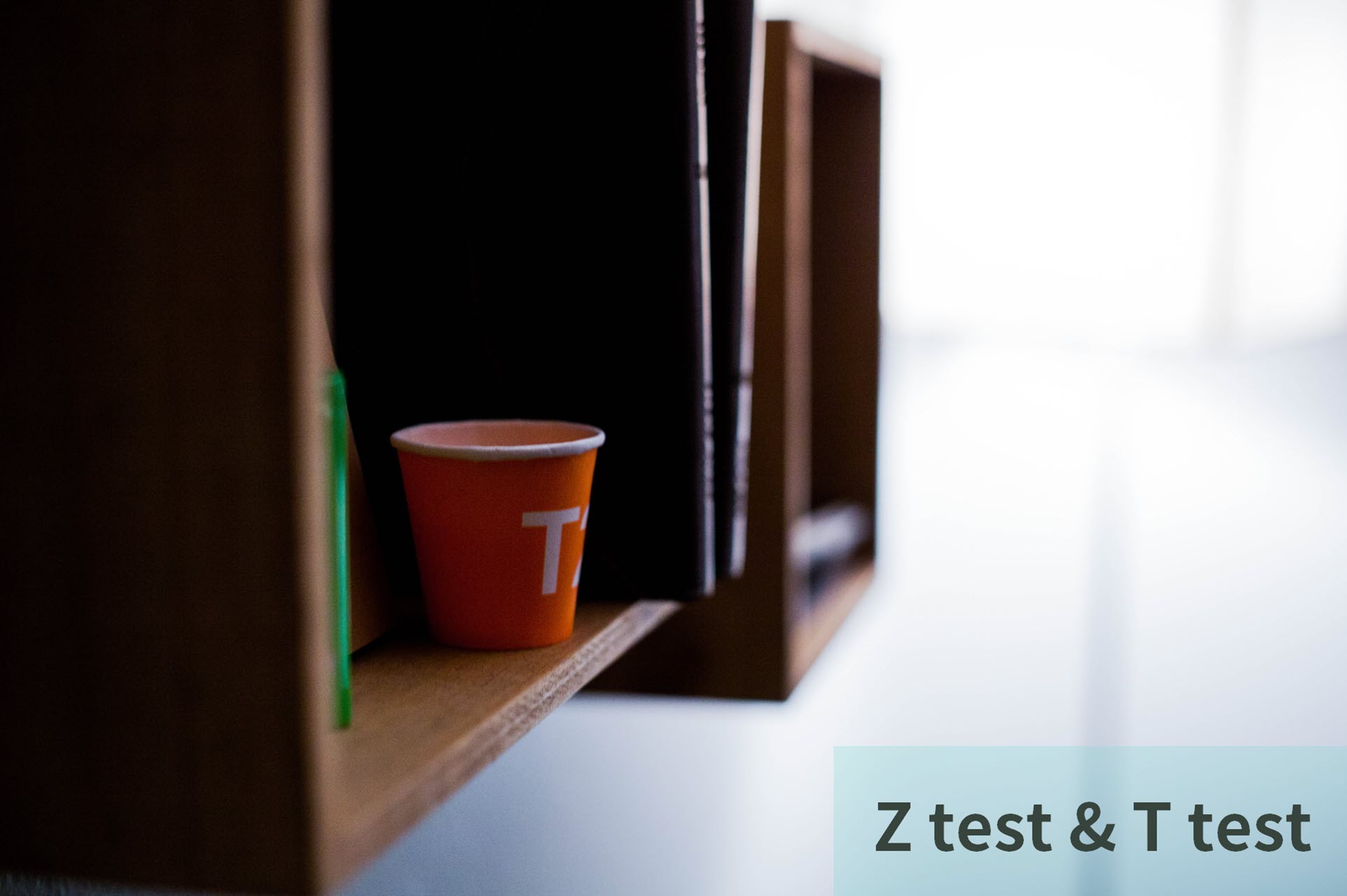 Photo by Dario Valenzuela on Unsplash

What are the different tests used to find the test statistic score?

In the previous article, we used test statistic as a value to compare against the critical value. Finding the test statistic helps us to accept or reject our null hypothesis. In this post, let us see what test statistic is and how to compute it.

This post is the part 3 of the four part series on hypothesis testing. 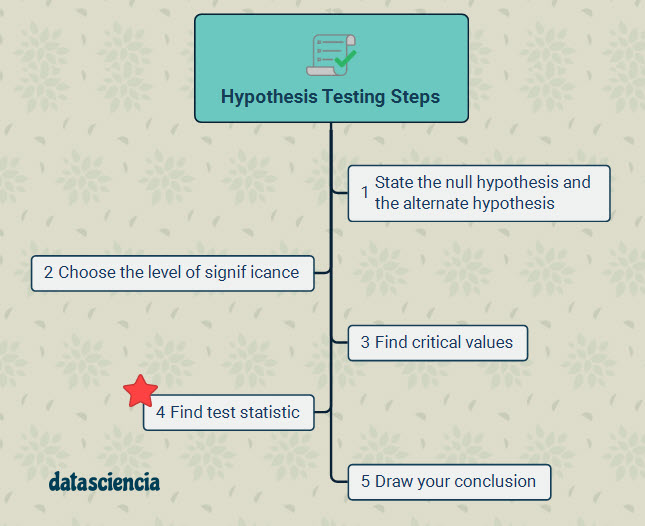 Note: We are in the fourth step of the hypothesis testing process.

What is a test statistic?

So what does this mean?

We use this sample and come up with a value (statistic), referred to as the test statistic.

Methods of finding the test statistic

There are various methods/tests for finding the test statistic. Usually, the following four methods are used.

In this article, we will cover the Z test and t test.

How are these tests different from each other?

Assumptions of a Z test

Z test is used when the following conditions are met.

The test statistic for Z test is represented as test Z

Let’s say the null and the alternate hypothesis are

The population standard deviation $ \sigma $ is known, and a random sample of size $n$ = 30 is taken, then the test statistic of $ Z $ would be

Let’s check our understanding with a detailed example

An automatic bottling machine fills cola into 2-liter (2,000- cubic cm) bottles. A consumer advocate wants to test the null hypothesis that the average amount filled by the machine into a bottle is at least 2,000 cubic cm. A random sample of40 bottles from the machine was selected, and the exact contents of the chosen bottles are recorded. The sample mean was 1,999.6 cubic cm. The population standard deviation is known from past experience to be 1.30 cubic cm. Test the null hypothesis at an $\alpha$ of 5%.

Let’s write the values that have been provided

1. Stating the null and the alternate hypothesis

We see the sign of the alternate hypothesis, and it is < (less than symbol) which means the test is a one-tailed lower-tail test.

2. Choose the level of significance

The corresponding Z score (critical value) is $z_c = -1.64$ Here the - (negative) sign implies that it is a lower tail test.

The rejection region is highlighted in the graph below. 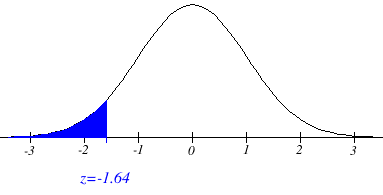 Here, the sample is $n = 40$, which confirms the first condition of the $ Z $ test mentioned above.

Second, the population standard deviation is known - which means we can use the $Z$ test to find the test statistic.

The formula for computing the $Z$ score is

When we substitute the values, we get

which yeilds the result $\textrm {test} \space z$ = -1.95. When we plot it in the graph, the graph will look like the below image. 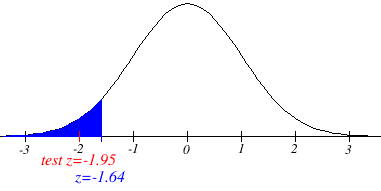 The test statistic $\textrm{test} \space z$ falls within the rejection range. So we reject the null hypothesis.

The hypothesis that the average amount filled by the cola machine into a cola bottle is less than 2,000 cubic cm.

To sum up, the Z test is used to calculate the test statistic when the null hypothesis is about the mean of the population and satisfies the assumption mentioned above.

Assumptions of a ’t’ test

$t$ test is used when the following conditions are met.

Characteristics of the ’t’ distribution

As the degree of freedom ($df$) increases, the t-distribution approaches the ‘Z’ distribution.

The ’t’ distribution with infinite degrees-of-freedom is known as the standard normal distribution.

The formula for computing the confidence interval to estimate $\mu$ is

Where $\bar{x}$ is the sample mean, $t$ is the test statistic of the $t$ distribution, $n-1$ is the degree of freedom, $\alpha$ is the level of significance, $S$ is the sample standard deviation, $n$ is the number of samples.

In a confidence interval, the area is symmetrically distributed between the two tails. 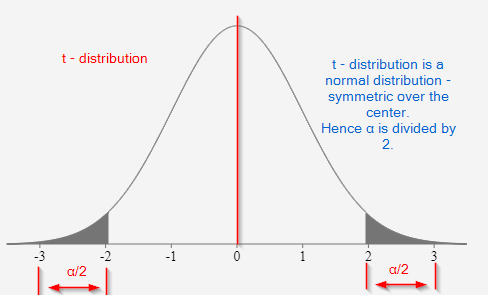 Example for a t-test

A stock market analyst wants to estimate the average return on a specific stock. A random sample of 15 days yields an average (annualized) return of $\bar{x}$ 10.37% and a standard deviation of s $=$ 3.5%. Assuming a normal population of returns, give a 95% confidence interval for the average return on this stock.

What we know here?

The confidence level is 95%. So the level of significance $\alpha$ deduced is 5%.

where $\alpha$ is the level of significance.

If we substitute the values, we get 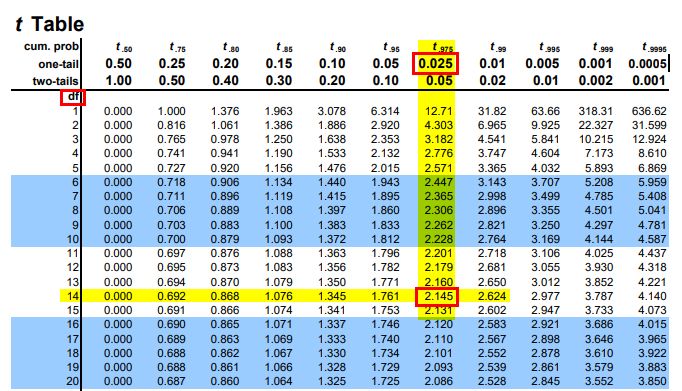 Substituting in the formula, we get

Degrees of freedom refers to the maximum number of logically independent values in a data sample which have the freedom to vary within. What does that mean?

We will take an example and try to understand.

Let us consider that we have a sample of 3 values.

And the mean of all the values is 10.

It is easy to deduce that the value of $x$ would be 10 as the mean of these three values has to equate to 10.

But, let’s say two values from this sample are not known,

Your company wants to improve sales. Past sales data indicate that the average sale was $100 per transaction. After training your sales force, recent sales data (taken from a sample of 25 salespeople) shows an average deal of $130, with a standard deviation of $15. Did the training work? Test your hypothesis at a 5% alpha level.

From the problem, first, we need to understand if the given problem belongs to which category of tests - Z or t.

Since the sample size is less than 30, and we don’t know the population standard deviation, we will go with the t test.

We know the hypothesis testing steps.

Since the symbol of the alternate hypothesis is greater than, it is a right-tailed test.

2. Find the level of significance. 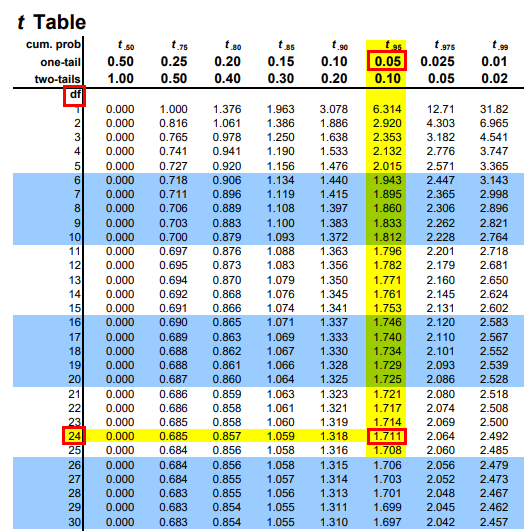 We know the formula for the t test is

Substituting the above values, we get

We see that the $t_{score}$ falls within the rejection region, so we reject the null hypothesis and accept the alternate hypothesis.

This means to say that indeed the average sales increased after the training.

In this article, we saw what a test statistic is! The different types of tests, when to use Z test and t test and their respective formulas. In the end, we saw the degree of freedom and an application of a t-test using an example.

We also got more familiar with the hypothesis testing process, and following it would help us accept or reject the null hypothesis in a logical manner.

Disclaimer: Some of the links on this page may be affiliate links. Datasciencia is a participant in the Amazon Associates Program, an affiliate advertising program designed to provide a means for sites to earn advertising fees by linking to products Datasciencia uses and trusts. If you purchase a product through an affiliate link, your cost will be the same, but Datasciencia will automatically receive a small commission. Your support is greatly appreciated and will help us to bring quality articles for the benefit of the community!