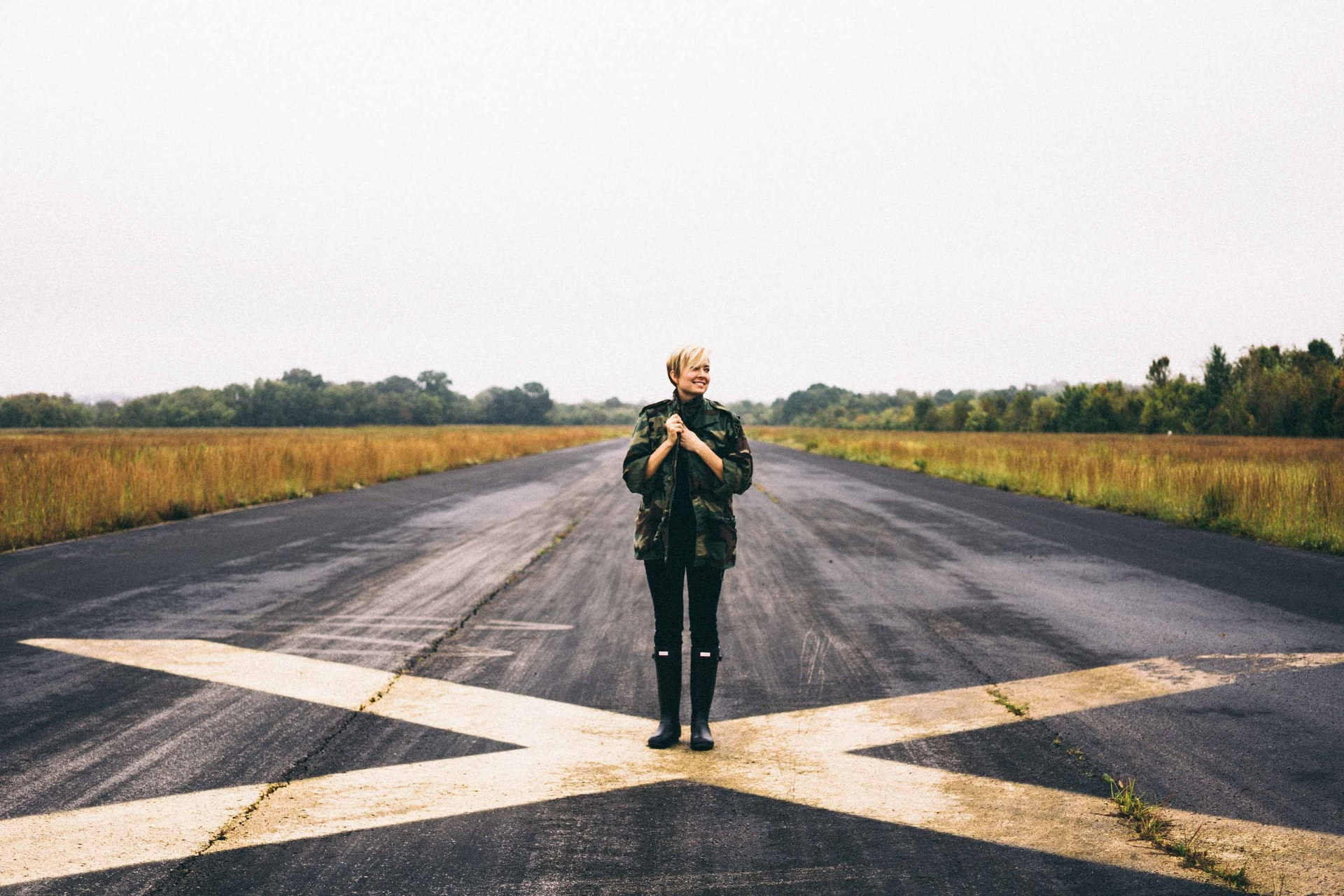 Photo by Joshua Ness on Unsplash

This post is the final part of the four-part series in hypothesis testing. What are the tests used to find the test statistic when we need to find the variance in the population.

This post is the part 4 of the four part series on hypothesis testing.

In this article, let us see two tests - the chi-squared ($\chi^2$) and F test, which tests the hypothesis about the variance of the population.

The sample estimate of the population variance is given by

$\chi^2$ test is used to test the hypothesis about a single population variance.

The formula for computing $\chi ^2$ is

If the chi-square value is more than the critical value, then there is a significant difference in the variance between the sample and the population.

The Chi-square statistic is used on numbers. We can’t use it for percentages, proportions, means, or similar statistical value. For example, if you have 20 percent of 100 people, you need to convert it to a number (20) before running a test statistic.

A manufacturing company produces bearings of 2.65 cm in diameter. A major customer requires that the variance in diameter be no more than 0.001 $cm ^2$. The manufacturer tests 20 bearings using a precise instrument and gets the below values. Assuming the diameters are normally distributed, can the population of these bearings be rejected due to high variance at a 1% significance level?

The problem talks about a single population variance. Therefore, we can use the $\chi ^2$ test.

1. State the null and the alternate hypothesis.

So the null hypothesis is

and the alternate hypothesis is

Since the alternate hypothesis has the greater than symbol $>$, it is a chi-square right-tailed test.

Note: If the level of significance is not given, take the default $\alpha = 0.05$ 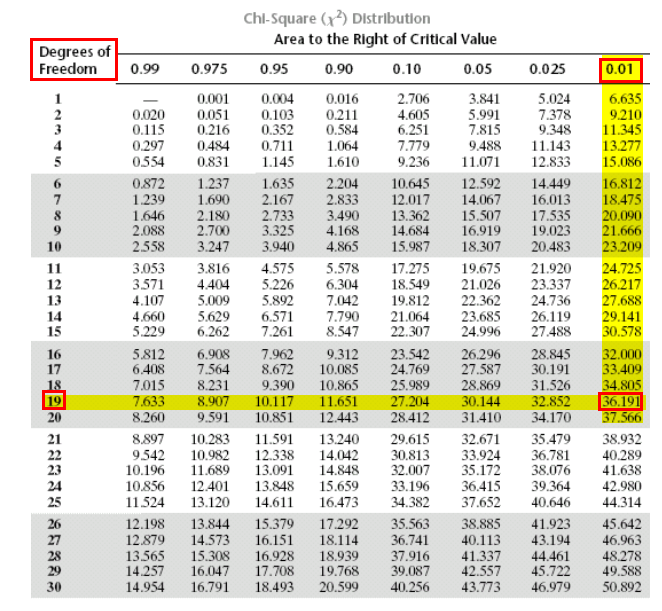 To find the test statistic, we will use the formula.

We don’t know the sample variance $s ^2$, but it can be computed using the data provided.

Substituting the values, we get

5. Draw the conclusion - to accept/reject the null hypothesis 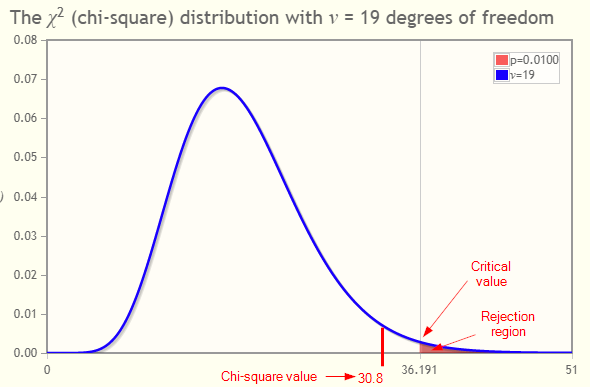 The bearings produced are within the specified limits required by the customer.

To conclude, a $\chi ^2$ test (chi-squared) is used to test the hypothesis about a single population variance.

$\chi ^2$ is useful when testing hypotheses about a single population.

What if we want to test the hypothesis about the difference in variances of two populations?

Example: Do parts manufactured on two different machines have the same variance or not?

Since the F-test compares two different populations’ variances using samples collected from each population, we can say that F-test is a ratio of two sample variances, i.e.

What does this formula mean?

Ideally, this F ratio should be about 1

So if we compute the F ratio and see if the value is near to 1, it means two samples have the same variance, thereby the population variance is also the same.

Important: Since the F test/distribution deals with two samples, there will be two degrees of freedom - one for sample 1 and another for sample 2.

Application of the ‘F’ test

A machine produces metal sheets with 22mm thickness. There is a variability in thickness due to machines, operators, manufacturing environment, raw material, etc. The company wants to know the consistency of two machines and randomly samples 10 sheets from machine 1 and 12 sheets from machine 2. Thickness measurements are taken. Assume sheet thickness is normally distributed in the population.

Understanding the type of test

Here the problem statement is about knowing the consistency of two machines in terms of variability.

For variances test, we have two tests - $\chi ^2$ and F test. But since we have to compare two variances, we have to go with the F test.

We have the data for machine one and machine two from which we can find the variance with excel.

Compute the rest of the parameters 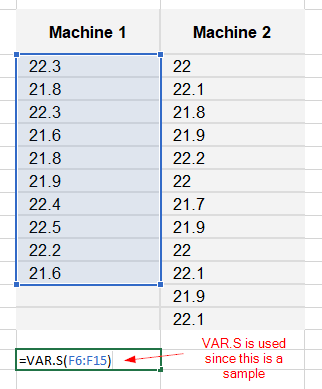 We compute the variance and the count of samples. 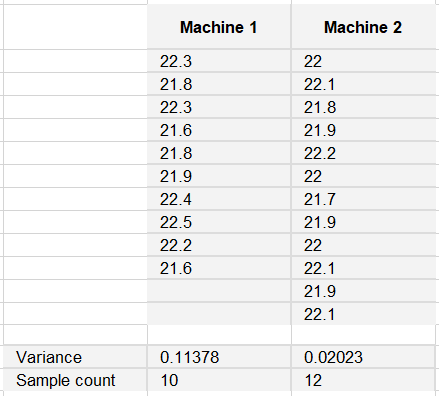 There are five steps to the hypothesis testing process. Let’s follow that one by one.

Since this problem talks about variance in the two machines, the null hypothesis will be that there is no variance.

The alternate hypothesis will be

Based on the symbol of the alternate hypothesis, which is $\ne$, we conclude that this is a two-tailed test.

Similar to tables for other tests, F tests also have a corresponding table called the F-table. 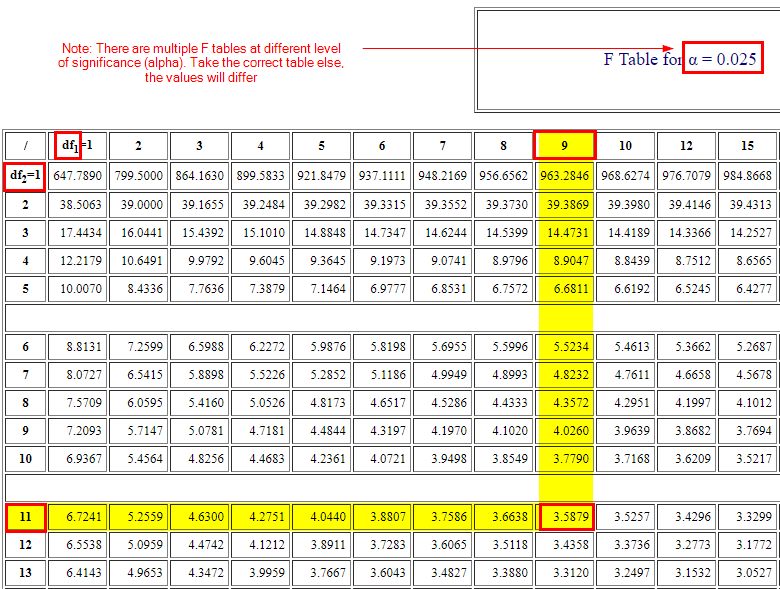 This number is for the right-tail. Remember, we have a two-tails for this hypothesis testing.

Since $F _{score} > F _{critical}$ or in other words, falls into the rejection region, we reject the null hypothesis.

That is, the variance in machine one and machine two are not equal. Machine one has a higher variance and hence needs inspection for issues.

The graph below illustrates the F score and the F critical value and why we reject the null hypothesis. 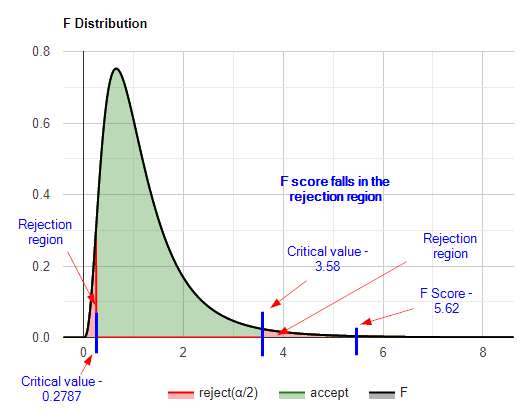 ANOVA is used to analyze the means of the samples.

What if there are three or more samples? Can we find if they are from the same population? We use the ANOVA test for this purpose.

Assumptions in the ANOVA test

Since we are comparing three groups or more, the null hypothesis of ANOVA would look like below.

We compute the F value and compare it with the critical value determined by the degrees of freedom. Here, the degree of freedom is calculated for the groups and the number of items in each group.

Let’s say we have three groups - A, B, and C, with the below samples picked.

These three groups have an equal number of samples.

Note: We will compute the F score both manually as well as using excel. If you want to move on with excel computation only, you may skip the below section and can proceed with calculation with excel (using data-analysis add-in).

We compute F value for the groups, which is the ratio between the two variances - i.e., the variance between groups and variance within groups.

We know that the formula for variance is

So the formula for the f value becomes

In ANOVA, there will be NO two-tailed test. ANOVA will ALWAYS be one-tailed, and that will be upper-tailed only. Why? We know that in the formula, we are dividing the sum of squares between groups and within groups, which would always yield a positive value, and hence it will always be upper tailed.

Here level of significance is not provided; we will take the default $\alpha = 0.05$ 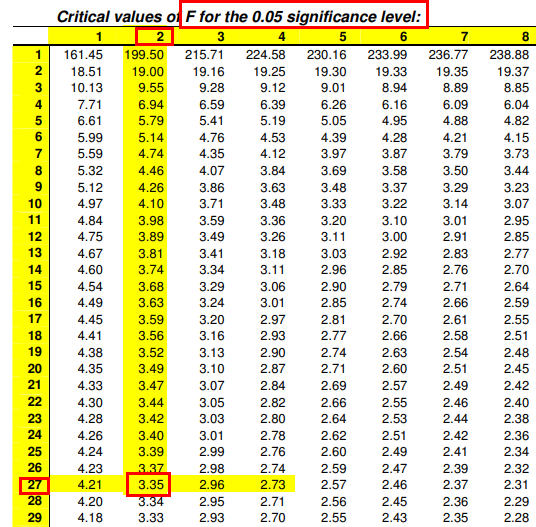 To compute it manually, we will be using excel. The following screenshot shows how it is done.

We know the formula is

Computing the sum of squares within groups and between groups manually. 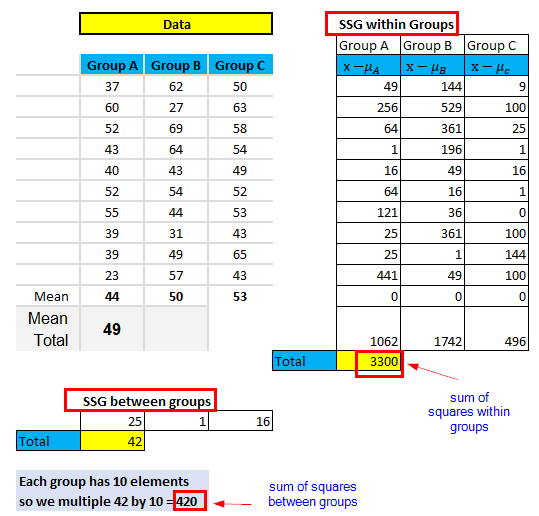 substituting in the formula, we get

Computing the sum of squares within groups and between groups via excel data-analysis add-in. 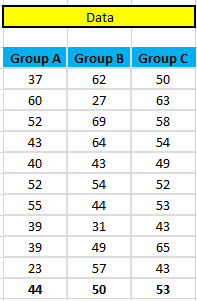 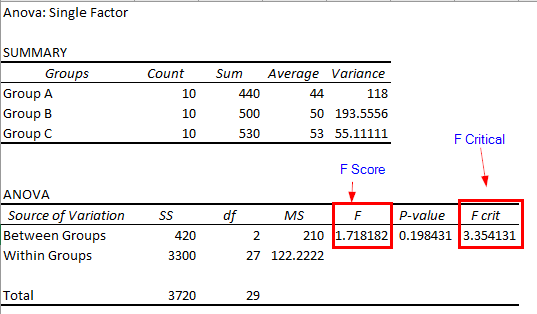 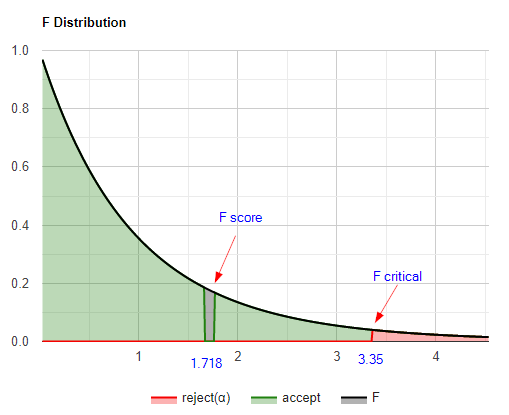 To summarize, we have seen two tests: the chi-square and the F test to test the population’s variances.

We have also seen ANOVA to test the hypothesis when more than two groups of samples are picked from the population.